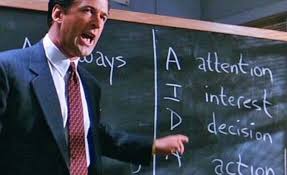 20 BEST SALES MOVIES YOU CAN LEARN FROM

Who says books and conferences are the only ways you can learn about sales? Movies can help too, and we aren’t just saying this to give you an excuse to spend some time in front of a T.V. There are indeed real and fictional sales stories worth paying attention to. And we’ve found some of them for you.

Death of a Salesman is an adaptation of the 1949 stage play written by Arthur Miller. The 1985 movie features the main character Willaim “Willy’ Loman. This 63-year old salesman loses touch with reality and fails to embrace change both in himself and in his immediate society. This causes him to flounder in his latter days. While the movie is somewhat colored by tragedy, some vital sales lessons can be inferred from the story.

This 1995 American comedy movie features the hilarious duo of Chris Farley and David Spade. Chris Farley plays the character of a not so bright young man called Tommy Callahan who loses his dad and inherits an automobile parts factory that’s near bankruptcy. Tommy wants to keep his father’s factory while his stepmom intends to sell it off and move on. The young man joins forces with his late father’s assistant in a bid to find new customers for the factory’s products. The story paints a picture of the rise of a master salesman. You might crack a rib, but you’ll undoubtedly be inspired.

What’s with sales movies and satire? You might wonder. Well, it seems scriptwriters find it amusing to make light of the struggles of salespeople. But this isn’t insensitive at all. We do need to catch a break! And Tin Men will definitely help you do that. The American comedy stars Richard Dreyfuss and Danny DeVito, who play the role of B.B. and Ernest Tilley, respectively. Both characters are rival door-to-door aluminum-siding salesmen. A minor car accident where each blames the other creates tension between both men, and they become sworn enemies. Both the feud between these two doesn’t take one’s attention away from the corrupt sales practices displayed in the movie and their effects.

This is another brilliant sales movie adapted from a play. The film focuses on a group of New York City real estate salesmen. They have just received news that all but the top two amongst them would be sacked after going through a training program. The film looks at what it means to sell under high pressure alongside the all too familiar struggles of a salesperson to find quality leads and close high ticket deals.

This is one of our favorites, and it’s not just because it has Will Smith in it. This American movie portrays a salesman’s life. As Chris Gardner, Will Smith finds himself and his five-year-old son homeless due to financial hardship. But Chris picks himself up and fights for himself and his son by choosing not to give up. In this touching and inspiring story, we see the effects of perseverance and grit in succeeding in any venture, including sales.

Joy is another American biographical drama that tells an inspiring tale. It features a young mother of two who decides to explore her passion for invention after struggling financially as an airline booking agent. She ends up inventing a fascinating product in the form of a mop but faces the challenge of selling it to the world. She ends up having to pitch the product herself in a T.V. infomercial, and the product becomes a massive hit, earning her thousands of dollars.

Diamond Men stars Robert Forster as Eddie Miller, a veteran traveling salesman who sells diamonds and jewelry. Having been in the business for thirty years, Eddie is finally ready to quit. But he’s asked by his firm to train a replacement before hanging his boots. Along comes Donnie Wahlberg, who plays the part of Bobby Walker. He’s the man Eddie chooses to teach. The story shows the journey of both men as they grow to respect and learn from each other.

Lovers of sports stories might especially find this one intriguing. Moneyball is an American biographical sports movie that features the ever-alluring Brad Pitt, who plays the role of Billy Beane. Beane is the coach of Oakland’s Athletics baseball team. He’s faced with the challenge of assembling a competitive team on a shoestring budget. Beane has to adopt a new approach to scouting and signing players, and he sells this idea to other members of his team. The movie essentially shows how trying out new methods can result in staggering positive results.

Perhaps you’ve heard people rave about this one, and you’re wondering why we waited so long to mention it. Well, here you have it! This gem of a movie stars Leonardo DiCaprio as Jordan Belfort, a brilliant but sinister stockbroker who apparently can sell anything. Belfort is a fraudulent stockbroker who ends up making a fortune from his activities but ultimately pays dearly for his unhinged, no-holds-barred approach to sales and life.

Based on the life of the iconic Steve Jobs, this 2015 British-American biographical drama draws from the writings of Walter Isaacson and Sorkin’s interviews. While the movie focuses on Apple and the impact of Steve Jobs, it portrays the unmistakable and remarkable sales tactics of the main Jobs. Plus, it takes a deep dive into the mind of a modern day genius, and who wouldn’t want that?

Adapted from Christopher Buckley’s 1994 book of the same title, Thank you for Smoking is another satirical sales movie packed with implicit lessons. Nick Naylor, played by the witty Aaron Eckhart, is a tobacco lobbyist who tries to juggle his official duties with being a fitting role model for his son. A key takeaway for salespeople is the art negotiating smartly and presenting compelling arguments.

Patterned slightly along the lines of The Wolf of Wallstreet, Boiler Room is an American crime drama that tells a young stockbroker’s tale. Seth Davis, played by Giovanni Ribisi, joins a brokerage firm and begins the life of a stockbroker after running a casino in his home. Davis helps his firm sell worthless stocks to unsuspecting people and later regrets his actions. This movie highlights the importance of ethical sales.

Jerry Maguire is a sports drama that features Tom Cruise, who plays the part of Jerry Maguire. He’s a sports agent who is willing to employ every tactic in the book in his clients’ interest. Maguire chooses to set up his own management firm. From his dealings, we glean certain sales principles, including the importance of focusing on the customer more than any other thing.

Say hello to the thrilling story of the fast-food franchise McDonald’s. The account details how Ray Kroc, a milkshake machine salesman, strikes one of the biggest deals of all time. The vital lesson for salespeople is that they should ensure they provide value even while chasing a good deal for themselves.

Looking for another heavy dose of inspiration? Then this true story will do. Door to Door is an account of Bill Porter, a door-to-door salesman with cerebral palsy. He defies the odds and succeeds as a salesman for a company selling household items. Porter shows that with determination and a can-do attitude, salespeople can beat the odds.

This is indeed an intriguing movie from a sales perspective. The Joneses are a fake family planted within a suburban town to sell things through disguised product placements. The team soon finds itself in a dire situation when the fake father, Steve, isn’t raking in enough sales. He soon stumbles upon a tactic that sends his numbers through the roof. The movie’s primary lesson is the power of placing products within the context of people’s problems and selling them as the solution to those problems. It also highlights the advantage of getting to know one’s target audience and its issues.

This is a business movie through and through. This comedy-drama tells the story of three salesmen who are out to secure a prospect’s business to save their sinking company. It stars Danny DeVito, Kevin Spacey, and Peter Facinelli as the three partners looking to close a big deal. The movie shows the need to connect with prospects on a somewhat personal level instead of just rambling on about a product or service.

Starring Dwayne Johnson as a financial advisor for NFL players, Ballers is an American comedy that teaches a few lessons about sales. Spenser Strasmore (Dwayne Johnson) goes about attempting to convince NFL players to spend wisely. We see how he navigates through various scenarios and hits his targets.

Promised Land narrates the story of a salesman working for a natural-gas company that attempts to buy the lands from the inhabitants of a small town. The lead character Steve Butler played by Matt Damon, pulls out all the stops as he attempts to seal a deal that would see his company move in to obtain the natural gas beneath that town. However, he makes a U-turn during a surprising turn of events.

This is a thrilling documentary on sales from Salesforce. It assesses the evolution of sales over time and its impact on humanity as a whole and salespeople too. It’s the perfect tool to remind yourself that you aren’t in the business of selling things but in the business of changing lives.

It’s a wrap from our end. Explore this rich list of intriguing sales movies packed with life lessons and timeless sales strategies. The film on our list will make you laugh, some will make you cry while others will inspire you immensely. But rest assured that each one tells a story that matters.